A Letter To My Staff 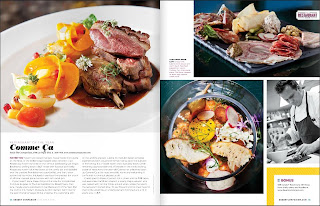 first its most important to say congratulations and thank you to my staff, and those at desert companion who chose to name us as "restaurant of the year".. its a real honor for myself to be even considered. we are one restaurant among an over saturated area of great places to eat. its a great accomplishment and you all should be very proud.
This is the first step of many great things to come, one small notch on the belt .
one of the main goals of our profession is to provide happiness and stir emotions within and prove what we do at Comme ca is a constant evolution that includes many different types of disciplines. For that reason, it’s important to carry out our quests and fulfill our dreams with authenticity, humility, and above all, passion,
and anything is possible. we are some of the best out there..

There will be people who disagree with this award.. but what defines "restaurant of the year" here is my definition. a constant strive to be on top, a team of dedicated individuals who improve regularly , food that has focus, integrity, and textural balance; every meal is a good experience, if not a life long memory. and a team that is not afraid to fail and come back and tell u to kiss there ass because they nailed it over and over... ..continue to evolve and put themselves out there and tell everyone "we are some of the best" so to me there are many restaurants of the year.. but don't forget, we want it more ! and we have earned it!

Comme ca, this is a perfect way to end 2011 and move into the new year geared up and ready to prove why we are the restaurant of the year. again Thank you for all the effort, hard work and integrity you all carry.
Chef Brian Howard at 12:52 AM No comments:

its time for turkey

Comme Ça, the bustling French brasserie brought to The Cosmopolitan of Las Vegas by renowned Chef David Myers, will give guests something to be thankful for this Thanksgiving. The popular eatery will offer a delectable, family-style, prix fixe dinner in celebration of the Thanksgiving holiday on Thursday, November 24.

Families and loved ones can come together to celebrate the joyous holiday with a French-inspired, specialty dinner created by Executive Chef Brian Howard priced at $49 per person.

No Thanksgiving dinner is truly complete without a decadent dessert to top off the traditional feast. For dessert, patrons will fall in love with the restaurant’s Deep Fried Bourbon Pumpkin Pie served with huckleberry ice cream created by Comme Ça Pastry Chef Ramon Perez.

About Comme Ça
Los Angeles-based David Myers brings his bustling modern brasserie Comme Ça, the second location outside of its popular West Hollywood flagship, to The Cosmopolitan of Las Vegas. Inspired by France’s vibrant neighborhood brasseries, the rustic chic Adam D. Tihany-designed restaurant serves up hearty brasserie classics including handcrafted cocktails. Comme Ça is situated within P3 Commons at The Cosmopolitan of Las Vegas, an innovative neighborhood of restaurant experiences that convey the makings of the perfect dinner party. Not only welcoming and highly personal, but also spontaneous with a delightful sense of discovery, the P3 culinary collection embodies a synergistic approach to the modern face of Las Vegas dining. At Comme Ça, lunch is served daily from noon to 5 p.m. and dinner is served daily from 5:00 p.m. to 11:00 p.m. The Hourglass (late-night) menu is available from 11 p.m. to close nightly. In 2011, Comme Ça received the Wine Spectator award and was named “Best Restaurant” by 944 Magazine. Comme Ça’s famed ‘Penicillin’ was also selected as “Best Cocktail” by Vegas Seven Weekly Newspaper. For reservations, call 877.893.2001 or 702.698.7910, or please visit www.cosmopolitanlasvegas.com or www.commecarestaurant.com for more information.
Chef Brian Howard at 3:04 PM No comments: 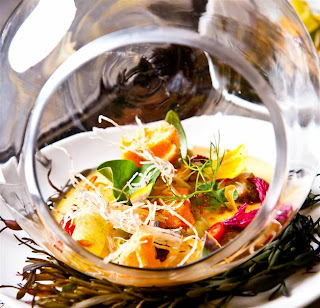 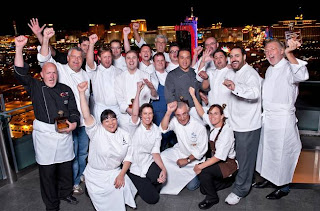 what a great group of chefs !
story by Robin Leach:
It was a feast fit for a king and served by the royalty of the Las Vegas culinary world. Even renowned three-star Michelin star Chef Pierre Gagnaire flew in from France to join the 17 chefs who prepared the 18 courses for the magnificent meal at the 10th anniversary Jean-Louis Palladin dinner at Alize atop the Palms.


I had the privilege and honor again of hosting the exclusive event for 100 food fanatics who each paid $300 for the torrent of taste treats. It all serves as a fundraiser for culinary grants to working chefs administered through the James Beard Foundation in Jean-Louis’ name. I knew him way back when at the prestigious Watergate in Washington, D.C., and here when he ran the grill of Napa at the Rio. He was the youngest French chef to win two Michelin stars.

Sadly, he died from lung cancer complications at age 55 in November 2001. He was considered one of the 20th century’s culinary geniuses, single-handedly raising the level of cuisine in America and creating a brotherhood of chefs.

Jean-Louis was given a “papal blessing” by the renowned Julia Child on her PBS shows for bridging a path between his native French culture to Nouvelle American Cuisine with his culinary innovations. Chefs in America today acknowledge his lasting influence on the national dining scene.

We presented each chef with a rare majestic bottle of tequila. They saved it until after the kitchen duties! Every item on the menu was taken from one of Jean-Louis’ recipes in his extraordinary cookbook Cooking for All Seasons. All of us gathered on the outside GhostBar patio for a group photograph.

Thanks to contributing photographer Tom Donoghue for his amazing (and super-sized) gallery that shows the chefs at work and play and many of the 18 courses served far better than I could ever describe.

I played auctioneer to raise additional funds, and high-speed artist Jean Francois, who maintains a home here, painted an amazing portrait of John Lennon between dessert and coffee, which we sold to a fan for $1,500. Luciano let me sell two truffle-tasting dinners at Valentino in the Venetian for another $3,000.

An extraordinary evening, a magnificent menu and a tremendous salute with a successful fundraiser to honor the memory of one of the first master top chefs to call Las Vegas home.
Chef Brian Howard at 12:31 PM No comments: